A cold front is draped north to sourth across eastern Tennessee this morning.  Scattered showers associated with the front have already made their way into the region.  The main line of storms isn't far away and showers and thunderstorms will continue into the overnight hours.  This event won't be a soaker, but it is going to be raining off an on all day.  Colder air filters in behind the front tonight.  It looks like the higher elevations will see a late season freeze.

Unseasonably cool temperatures are the name of the game this weekend.  Even with sunshine, temperatures will be 10-12 degrees below normal.  Frost is still a possibility Saturday night.  It all depends on if the winds die down enough.  Either way, it's going to be chilly, especially by April standards.

A cold air wedge on the lee side of the Appalachians combined with a disturbance off the coast of the southeastern US will keep cooler temps, cloud cover, and fog in play for Monday and Tuesday.  The good news is that the forecast is drier than what it was yesterday.  It now only looks like a very slight chance of some showers, but it's still going to be cool and damp.

Another cold front moves through later in the day on Wednesday, bringing more showers and thunderstorms back into the forecast. 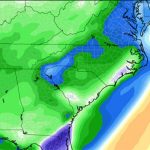