After an exciting week and a half of weather, the next few days are going to be rather calm.  High pressure is and will be in control at the surface through the end of the weekend.  Today will be mostly sunny but on the chilly side as a pesky northwesterly wind will keep a  lid on the temperatures.

As that area of high pressure begins to move east, that northwesterly wind flow will diminish and temperatures will significantly increase for the weekend.  Sunshine will persist and above average temperatures are going to have some people longing for spring.  A lot of locations will be in the mid to maybe even upper 50’s on Saturday and Sunday.  It should be a fantastic weekend of spring skiing and snowboarding.

Our next system is slated to move through on Monday.  Increased cloud cover late in the day on Sunday will be a prelude to showers on Monday.  High pressure looks to build back in on Tuesday and we’ll dry out for at least a few days. 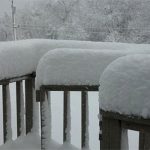