Beautiful Day Ahead With Snow on the Way for Tonight

Today will be very pleasant before another low pressure system moves into the region later tonight. This is not expected to be a significant accumulation event for the region, as the Northeast will take on the brunt of the storm. Nonetheless, several resorts can expect an inch or two out of this system, with the West Virginia ski areas seeing more. Temperatures behind the cold front will be very cold, but nothing like what we have already seen this year. As quickly as the storm enters the region, it will exit just as fast. The system will be out of the region by later Friday. Saturday and Sunday look like perfect days to get out on the snow, with sunny skies and temperatures in the low 20’s. Don’t forget about the SkiNC Summit at Beech Mountain on Saturday! For more information, go to the event webpage.

Today: Mostly cloudy, with highs around 30. West wind between 5 and 9 mph.

Tonight: Snow showers beginning in the early evening. Low around 10. Wind chill values in the negatives. Breezy, with a south wind 11 to 20 mph becoming west. Winds could gust as high as 30 mph. Chance of precipitation is 100%. New snow accumulation of 3 to 5 inches possible.

Friday: Snow showers tapering off by midday. High temperatures struggling to reach double digits. Wind chill values as low as -10. Northwest wind between 17 and 26 mph, with gusts as high as 40 mph. Snow accumulation of 1 to 2 inches possible.

Today: Mostly cloudy, with highs in the mid 30’s. South wind between 3 and 7 mph.

Tonight: Snow, mainly after 10pm. Lows in the mid to upper teens. Calm wind becoming west between 15 and 20 mph. New snow accumulation of 1 to 2 inches possible.

Friday: Snow showers tapering off by midday. Cloudy, then gradually becoming partly sunny, with highs in the mid to upper teens. Breezy, with a northwest wind between 15 and 20 mph, with gusts as high as 40 mph. New snow accumulation of around an inch possible.

Today: Cloudy, with highs in the upper 30’s. Calm wind becoming south between 5 and 8 mph.

Tonight: Snow likely. Cloudy, with a low around 24. South wind 8 to 11 mph becoming west. New snow accumulation of around an inch possible. 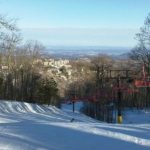 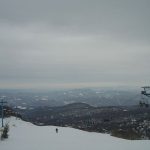