Beautiful Weather For the Next Couple of Days

A high pressure system has begun to track across the southeastern United States. As a result, ski areas across the region should see blue skies and plenty of sun today. The only exception being the resorts in West Virginia. Westerly flow around the high will create cloudy conditions with the possibility of a flurry or two in the morning. It will be nothing like the past few days though. Conditions across the entire region will be superb and the start of MLK weekend looks great!

Today: Possibility of a snow shower or flurries in the morning. Cloudy, with highs in the upper teens. West winds between 5 and 10 mph.

Tonight: Cloudy, with a low in the mid teens. West wind around 5 mph.

Saturday: A slight chance of snow showers in the late afternoon. Mostly cloudy, with highs near 31. Breezy, with west winds around 10 but increasing to 20 throughout the day. Wind gusts could reach 25-30 by later in the day.

Tonight: Partly cloudy, with a lows in the upper teens to 20. Calm winds.

Saturday: Partly sunny, with a highs in the low 30’s. West wind between 6 and 8 mph.

Tonight: Mostly cloudy, with a low around 22. Calm wind. 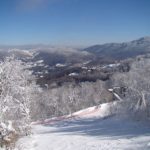 Powder Conditions Throughout the Southeast!
Menu