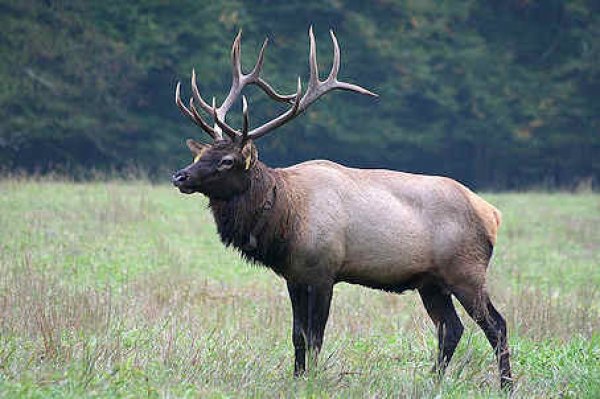 This near perfect photo was sent to us by Alice Grimes of Atlanta. She said that she had no clue that there were elk in the Maggie Valley area. Actually elk once roamed the southern Appalachian Mountains and elsewhere in the eastern United States in significant numbers until they were over-hunted and city development created a loss of habitat for them. According to the National Park Service, the last elk in North Carolina was believed to have been killed in the late 1700s.

By 1900, the population of elk in North America dropped to the point that hunting groups and other conservation organizations became concerned the species was headed for extinction.

The elk photograghed here is part of a program that began with the experimental release of elk into Great Smoky Mountains National Park in February, 2001 with the importation of 25 elk from the Land Between the Lakes National Recreation Area along the Tennessee-Kentucky border.

In 2002, the park imported another 27 animals. All elk were radio collared and were monitored during the eight-year experimental phase of the project. In 2009-2010, the park began developing an environmental assessment of the program and a long-term management plan for elk. Project partners include the Rocky Mountain Elk Foundation, Parks Canada, Great Smoky Mountains Natural History Association, Friends of the Smokies, the U.S.G.S. Biological Resources Division, and the University of Tennessee.

(Thanks to NPS for portions of this news release and thanks to Alice for the great photo!)

The Mild Days Continue for the Next Week…

Snow covers a cemetery with one lone US Flag raised – We honor our veterans today.
Menu