They say that distracted drivers are those most prone to accidents these days. Cell phone usage, putting on makeup, etc. As I drove around the mountains on Saturday and again on Sunday I kept coming across one distracted drive after another as many had one hand on the steering wheel and one hand holding a camera out of their window!

I’ll admit that I too have been guilty of such behavior. I heard John Hoffman from up at Fred’s General Mercantile on Beech Mountain talking on the radio this morning and he was witnessing that the leaves around the 5500′ elevations of Beech were AT PEAK color. I think that they might actually be slightly PAST PEAK color up there. It’s gorgeous regardless as every color and hue imaginable are on display at the ski mountains of the Southeast and Mid Atantic.

If traffic on the roads and byways of the area are any indication, visitors are in agreement as roads were very crowded both on Saturday and Sunday.

Sugar Mountain celebrated their annual Oktoberfest activities on Saturday and Sunday. We were there to witness what HAD TO BE their largest Oktoberfest crowd ever. The weather was awesome with sunny, blue skies and temps in the upper 60s for the most part. I got there at around 11am and after walking around a bit…we took in the chair lift ride to the top. The lift ride up had everyone talking about how slow the lift was…as they had it cranked EVEN SLOWER than normal to allow some of the older riders an opportunity to step off at the top. The trip from the bottom to the top of their 1.5 mile trail system took about 40 minutes but the sun baking on my shoulders and the awesome color on display made for an enjoyable trip and many Kodak moments. The only thing that was a little disconcerting was the four or five woolly worms that past us on the ground on our way up.

Once up top, we hopped off and walked down Switchback and Upper Flying/Lower Flying mile. The views up top were great as fall foliage season was on full display from up there.

My personal take on the leaf status is that the highest elevations are slightly PAST peak. Most of the elevations around 3500-4000 feet (like Banner Elk, Blowing Rock, Boone, etc) are all gorgeous and should peak sometime this week to this weekend, which is perfectly timed for this weekend’s Woolly Worm Festival and the Valle Fair fun this weekend in the High Country.

The winning Woolly Worm will do his predicting this coming Saturday. However if the winning worm looks anything like the fuzzy critters I came across this weekend, we’re in for a great, cold and snowy winter! I was stocking our barn with hay for this winter and we picked up six worms throughout the day and they were all very “woolly”, thick and all had about six bands of black on the front and a couple of black bands on the tail end…meaning eight weeks of colder and snowier weather than normal. The middle four bands have been dark brown which is reported to mean about normal temps and snow.

We’ll leave the official doctoring (I mean predicting) to the pros of this weekend’s event but I’m guessing we’ll get a good forecast out of that bunch.

We’ll share some fall color with you guys throughout the week – for those of you who can’t make it…and of course one of the best ways to witness the fall leaf season if you can’t make it here personally is via the LIVE WEBCAMS. Be sure to check them out at www.HighCountryWebCams.com .

Send me an email with your pics and videos to: [email protected]

So Long to Sunshine for a Few Days 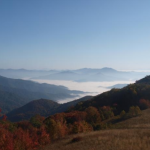