A cold front pushed through the region last night, bringing some snow to the ski areas across the Southeast. As the system continues to track across New England today, snow showers will begin to taper off by midday for the more southern areas. The resorts in West Virginia will see a few more inches of the white stuff today, along with chilly temperatures and blustery winds, as snow showers will persist into the late afternoon. High pressure will briefly build over the region before the next quick moving system arrives late Wednesday into early Thursday.

Today: Snow showers tapering off by late afternoon. Highs in the mid to upper teens. Blustery northwest wind around 20 to 25 mph with gusts as high as 40. Wind chills below zero. Snow accumulation of 1 to 3 inches possible.

Tonight: Scattered snow showers possible before midnight. Mostly cloudy, with lows around 5. Wind chill values as low as -10. Breezy, with a northwest wind 15 to 20 mph decreasing throughout the night.

Tomorrow: Partly sunny, with a highs in the mid teens. West wind between 5 and 10 mph.

Today: Snow showers tapering off by midday. Mostly cloudy, with highs ranging from the upper teens to low 20’s. Blustery northwest winds of 15 to 20 mph.

Tonight: Mostly cloudy, with lows in the low to mid teens. Breezy, with a west wind between 8 and 15 mph diminishing throughout the night.

Tomorrow: A slight chance of snow by early evening. Mostly cloudy, with highs around 32. West wind between 5 and 10 mph.

Tonight: Increasing clouds, with a low around 11. Breezy, with a northwest wind 10 to 20 mph.

Tomorrow: Mostly cloudy, with a high near 34. West wind between 5 and 10 mph. 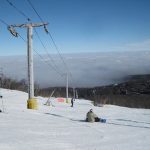 Above the Clouds at Beech Mountain