More SNOW is in the Forecast!

Today: Mostly sunny, with a high near 23. Northwest wind between 6 and 8 mph.

Tonight: A chance of snow after 3am. Mostly cloudy, with a low around 15. Light and variable wind. Chance of precipitation is 40%. New snow accumulation of less than a half inch possible.

Monday: Snow. High near 28. Southeast wind between 3 and 6 mph. Chance of precipitation is 90%. New snow accumulation of 1 to 3 inches possible.

Monday Night: Snow, mainly before 5am. Low around 26. Southeast wind around 6 mph. Chance of precipitation is 80%.

Several forecasters are expecting a heavy snow event (all snow) for the highest elevations of North Carolina, West Virginia and Maryland with perhaps a foot of new snow on already snow covered terrain.

NORTHWEST FLOW AND SYSTEM SNOW ON THE WAY! 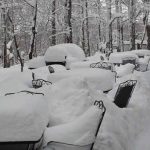