To use an aprapo quote today (for dual reasons) from President Franklin D. Roosevelt, today (and yesterday is) “…a date which will live in infamy”. By the way it is STILL SNOWING! I promise to get our team involved today to post up several photos and videos of all of the snow happenings from around the region. We were so busy on Monday simply keeping up with the phone calls and emails (and the snow) that we only had opportunities to take more photos and videos. We’ll do a video blog from Friday through Monday (and it looks like today) and post that up for all of you who are not in the mountains and just want to live vicariously through the website.

It IS a winter wonderland across much of the region.

I have to tell you that my buddy Joe Steven called yesterday and said, “Okay, Mike – I tip my bogan to the “snow goose” for forecasting all of this snow last Thursday. I admit when I was wrong.”

Usually the snow prone West Virginia ski areas lead the way in snowfall totals from individual storms and on the season and there’s not much doubt that will probably be the case when the season is all over with. However, TO DATE (December 7th) Beech Mountain Ski Resort in North Carolina is the snowfall leader on the season with 30.1″ on the season! Davis, West Virginia’s Canaan Valley and Timberline Resorts have now seen 29.2″ of snow and Snowshoe is reporting 24″ thus far. Beech Mountain averages about 80″ per season and they saw 122″ during the 2009-2010 campaign. I know that long range forecasters are saying this will be a slightly sub par natural snowfall season however Beech has already picked up 38% of the annual snowfall and it is only December 7th.

Oh yea – and it is still snowing and the National Weather Service is forecasting another inch or so of accumulation for today.

This storm has dumped Northwest Flow snows across a wide swath of the southeast and mid Atlantic mountains and it hasn’t been exactly “equal” in “presentation”. For example – while Beech has seen 18″ from the Thursday-Tuesday storm some areas like over at Cataloochee have seen much less. Cataloochee is reporting a TRACE of new snow this AM and 5-6″ from the storm thus far. While Beech has seen 30.1″ on the season, Cat has 10″. Sapphire Valley has only seen a TRACE of snow all season thus far and they’ve had borderline snowmaking ops as well. It IS 16° there this morning so Sapphire Valley is making snow and gearing up for a hoped for December 17th opening day.

We mentioned Cataloochee’s snowfall thus far on the season, and yet just south of them at Wolf Ridge Ski Resort they’ve seen a FOOT of snow from this storm and 16″ on the season.

I was speaking with one of our contacts at Bryce this morning and she was excited about the fact that it is 18° there this morning and that they are making snow. They are planning to open Friday. So far this pre-season they have had nothing more than a dusting of snow in the last few days AND on the season to date. Now you know why snowmaking is so important.

George Willetts who serves as Night Manager at Massanutten shared this funny story this morning. He said, “Mike it’s funny but just 20 minutes from us they’re getting snow and over toward’s Roanoke, etc. they’re getting lots of it. It’s the same with rain – the forecasters will call for it, but the ridges just over from us will grab that moisture and we just won’t get it.”

That’s obviously GOOD when it comes to rainfall. George did tell us that Mass is planning on opening this weekend from the top and “DJ” (Diamond Jim) will be open. He’s thinking that the terrain park will get an early opening as well. We’ll get a word with Kenny Hess or Steve Showalter there asap and talk more about what Massanutten has planned for this weekend.

Ditto Wintergreen Resort which has thus far seen only 2″ from this storm and 2″ of natural snow on the season. Like Massanutten, Wintergreen is bombing the slopes with manmade snow and at 8° at Wintergreen this morning – that manmade variety rivals real powder. Wintergreen opens this weekend as well.

BACK TO THE DEEP…

As reported a bit ago, Davis, WV’s Canaan and Timberline have seen the most natural snow in the state, thus far – and as of this morning David Lesher is reporting:

Snowshoe Mountain is always in on the deep stuff and they picked up 4″ more snow in the last 24 hours and 17″ in the previous 72 hours. They’re now at TWO FEET of snow on the season. REMEMBER THAT SNOWSHOE OPENS TOMORROW – WEDNESDAY and they’re still getting snow and the opening day conditions should be EPIC! They’re thinking that they’ll open with 14 trails and 4 lifts with powder and packed powder conditions. Too cool!

Wisp Resort is cranking out the snow with their top-rated snowmaking system. They’ve also seen more than a FOOT of snow from the storm. We received a few emails from people asking because Wisp is reporting 11″ of snow on the week and 5″ on their snow report. We tried to get through to Marketing Director, Lori Epp but the line was busy. We spoke with some other contacts there and they all report what we’re seeing via CoCoRaHs up there. Wisp has seen 14″ from the storm and now 18″ on the season.

Ober Gatlinburg plans to open Friday for all you “Ober” fans! They’ve seen a bit of snowfall over the last few days (3″ according to three sources) and they’ve been blasting the trails with snowmaking as well.

The Snow is Tapering Off in North Carolina While the West Virginia and Maryland Ski Resorts Look for Another FOOT of Snow Today and Tonight! 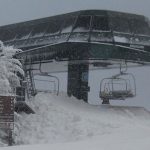