One More Day of Sunshine

Today will be another day of pleasant weather with partly sunny skies and temperatures in the 40’s for most of of the region.  Making it’s way across the country though is a low pressure system which is going to bring us another round of heavy rain Wednesday and into Wednesday night.  The National Weather Service has already issued a flood watch for the area as they are saying we could see rainfall amounts of 1-3″ with locally higher amounts possible.  The ground is still saturated and rivers and streams are still fairly high after this weekend’s event, so flooding is definitely a strong possibility for some areas.  Thursday, the accompanying cold front will cross the region and will change the rain over to snow for higher elevations.  Accumulations will be minimal.  By Friday, we will see a return to sunshine and seasonable temperatures which will last throughout the weekend. 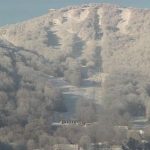