Our Blue Ridge and Smoky Mountains are Pretty Smoky! Our Kenny Griffin created a very cool time-lapse video showing the view of Grandfather Mountain as dense smoke from as many as 97 active fires burned across the Southeast and southern Appalachians. More than a dozen fires were burning out of control and one estimate puts it at more than 25,000 acres that have been charred.

The timelapse that was captured from our Grandfather Mountain LIVE STREAMING WEBCAM (via ResortCams.com) is shown below and spans a 24 hour period that shows how beautiful and clear the skies were until around lunchtime on Tuesday.

I personally stepped out of my office just off Hwy 105 in Foscoe around noon and was immediately hit with the awesome smell of a wood fire. While the smell was great, the idea that tens of thousands of acres of forest were burning hit me. Also, visibility on portions of Hwy 105 (around Broadstone Road at Valle Crucis) was really more like a dense fog.

Tuesday was the smokiest day I can remember in my 27 years in the High Country. I remember a wildfire up on Seven Devils a number of years ago that had things pretty smoky – but nothing like Tuesday. 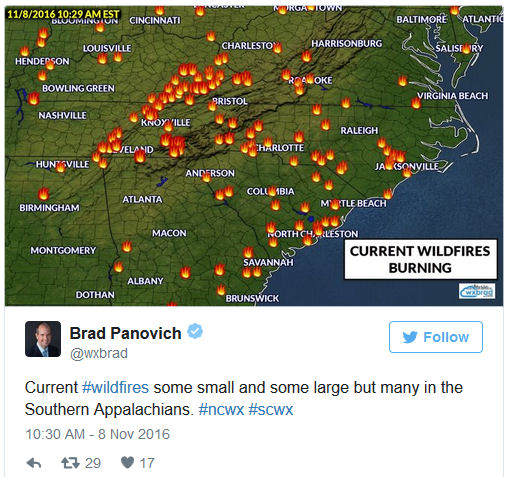 Our SkiSoutheast.com Meteorologist Brad Panovich shared a tweet that shows how widespread the fires were as of Tuesday morning. Here in North Carolina – the largest fires were near Lake Lure, Franklin, and Sylva, and smoke from these fires dominated our air Tuesday.

As of Wednesday morning, the wind has shifted and things are a good bit less smoky and considerably cooler than it has been lately. Temperatures will be steady Wednesday morning then fall in the afternoon. After a cool Thursday, we have a brief temperatures rebound Friday ahead of a dry front moving through Friday afternoon. The weekend looks cool and dry…which is NOT great news for the ski area snow-making crews who are all ready, willing, but not able to make snow just yet.

By the way – HERE is a link to see all of our mountain and lake cameras via www.ResortCams.com.

FROM AROUND THE REGION:

As of Monday, 97 fires were active in Tennessee, and smoke from the blazes could be seen as far away as southern Ohio.

In neighboring Kentucky, 33 wildfires were burning statewide and had consumed 15,950 acres according to the state’s Department of Forestry. Burn bans were in place in 60 counties across the state, and Gov. Matt Bevin declared a state of emergency on Thursday.

Farther east, the North Carolina Forest Service said Monday that 30 fires were active, and burning bans were in place for 25 western counties. According to Charlotte meteorologist Brad Panovich, most of the mountains in western North Carolina have not seen significant rain in 75 days.

“I haven’t ever seen it this dry in my lifetime”, said Jane A. Thomas, 70, of Cashiers, N.C., a mountain village about a 1½-hour drive southwest of Asheville.

Over the weekend, nearby fires filled Cashiers with smoke before winds shifted, blowing it back toward Tennessee.

In Georgia, the Rough Ridge fire has grown to over 5,000 acres and is the largest in the region. It was caused by a lightning strike on Oct. 1 and is being fueled by the parched conditions and dry leaf litter. “Because of rough terrain firefighters are facing, crews are heavily monitoring the fire using infrared flights and using fire lines to control it but are allowing it to accomplish its natural ecological role,” reported television affiliate WXIA in Atlanta.

The situation is going to get worse before winter rains and snow most likely extinguish the fires. “The fire danger will go down as we get colder”, but “the short-term forecast isn’t good, while the pattern has changed to cooler weather the lack of moisture remains. No significant rain is expected for the next seven days,” Panovich said.

HOW DOES THE “DESERT SOUTHEAST” CONDITIONS AFFECT SNOWMAKING?

We’re planning on speaking on that very subject over the next few days. Check back often for updates on SkiSoutheast.com, HighCountryWeather.com and ResortCams.com.

The post Our Blue Ridge and Smoky Mountains are Pretty Smoky! appeared first on Ski Southeast. 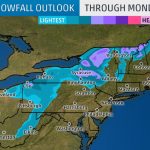 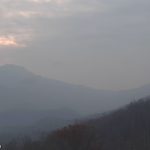