Powder Conditions Throughout the Southeast!

Wow, was it nice to see the sun peaking out from the clouds this morning!  Yesterday brought some brutal conditions as temperatures were bitterly cold and the winds were whipping around all day.  Skiers rejoice today though, as ski areas in the region will have sweet powder conditions as a result of yesterday.  An area of high pressure over Arkansas in conjunction with the low off the coast of New England will continue to create northwest flow for the majority of the day.  However, snow showers should taper off by the evening with winds drastically decreasing.  Tomorrow will be a beautiful day, with mostly sunny skies and more tolerable temperatures.  It wouldn’t be a bad day to play hookie from work and get in a powder day before the crowds arrive for MLK weekend!

Tonight: Snow showers tapering off by midnight.  Cloudy, with lows hovering slightly above zero. Wind chill values ranging from -5 to -10.  Northwest wind between 7 and 11 mph.  New snow accumulation of less than a half inch possible.

Today: Morning snow showers tapering off by early afternoon.  Mostly cloudy, with highs of 15-20. Wind chill values as low as -5. Northwest winds between 10 and 15 mph, diminishing throughout the day. Total daytime snow accumulation of less than one inch possible.

Tonight:  Mostly cloudy, with a lows in the 5-10 range. Wind chill values in the negatives possible. Northwest wind between 5 and 9 mph.

Friday: Patchy fog before 7am. Otherwise, mostly sunny, with a highs in the low to mid 20’s. Wind chill values around zero.  Northwest winds between 5 and 7 mph.

Tonight: Mostly cloudy, with a low around 14. Northwest wind around 6 mph becoming calm.

Friday: Partly sunny, with a high near 32. Light west wind.

Beautiful Weather For the Next Couple of Days 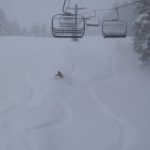 A Photo from Snowshoe on 1/12 Showing Sweet Powder Conditions!
Menu