A cold front passed through the region late yesterday and is located just to our south right now.  A disturbance will move along this frontal boundary during the day today, bringing about the possibility for afternoon scattered showers and thunderstorms once again.

An area of high pressure currently located in the Ohio River Valley will move off to the east tomorrow.  As a result, we’ll see winds change to a southerly direction, increasing chances for precipitation in the afternoon and early evening hours tomorrow.  This southerly wind flow continues on Saturday, ahead of an approaching cold front.  Showers and thunderstorms will be more widespread.

The front is slated to move through either late Saturday night or early Sunday.  Showers and thunderstorms will mostly be confined to the first half of the day on Sunday.  Once this front moves out of here, significant changes are in store for the first half of next week.  As I noted on Monday, a large ridge of high pressure will shift to the southwest United States, allowing for the jet stream to dip further south in the east.  High temperatures will be in the low to mid 70’s for the first half of next week.  Humidity levels will also be much lower.  Let’s just hope this lasts! 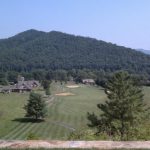 A Perfect Day for Golf in the High Country