The past few days sure have been nice.  Unforunately, it looks like the latter portion of today and most of tomorrow is going to be on the gloomy side.  It seems like lately we can’t get more than a couple days of nice weather in before rain and thunderstorms reappear.  The good news is that warmer temperatures will stick around for the weekend, unlike the past few events where we saw a cold rain and snow.

A backdoor cold front will cross the region from the north tonight.  Clouds have already made their way into our area and they will increase as the day goes on.  Showers and isolated thunderstorms are possible later this afternoon as the front nears.  They will continue through the overnight hours, lasting into tomorrow evening.  While tomorrow won’t be a washout by any means, most places will see some precipitation.  Those areas where a thunderstorm moves through will obviously see higher rainfall amounts.

The front will lift to our north Saturday night, allowing for the return of warmer air as winds will once again be from the southwest.  Sunday looks to be the nicest day of the year so far.  We’ll see summerlike high temperatures in the upper 70’s to near 80 for most locations and plenty of blue skies to go around.

Another cold front will arrive on Monday, bringing with it the possibility for more thunderstorms.  It will quickly pass though the region though, and behind that front we’ll see cooler temperatures.  Don’t worry though, when I say cooler I am talking about highs still making it into the mid to upper 60’s. 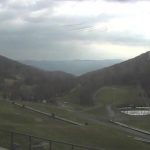 The Clouds are Rolling In…