A very slow moving cold front is on it’s way to the region right now.  Currently, it’s located in eastern Tennessee and will continue to move east throughout the day.  Associated precipitation is located behind the front, therefore showers and thunderstorms won’t begin until the late afternoon hours today.

High pressure begins to build into the region during the latter half of tomorrow.  We should see things start to dry out by the afternoon, but the clouds will stick around all day.  Much colder temperatures are also in store for tomorrow.  You’ll start to notice temperatures beginning to drop late this afternoon with the passage of the front.  Highs tomorrow will struggle to reach 50, as northwest winds will be fairly breezy.  Wednesday night will bring near freezing temperatures for just about everyone.  The higher elevations will get below freezing.  You’re gonna have to turn the heat back on again!

Thursday looks pretty nice as we’ll see sunny skies and temperatures rebounding back into the low 60’s.  Cloud cover overnight should prevent temperatures from getting to freezing again.  However, frost is expected in some of the valleys.

The weekend gets a little crazy.  A cold front on Friday, a warm front on Saturday, and another cold front on Sunday will create a chance of showers and thunderstorms each day.  Right now nothing major is expected and we’ll see more dry weather than not.  The chances are still there though.  Temperatures will remain average for this time of year. 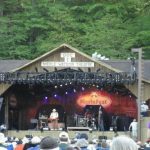