What a nice surprise it was to wake up this morning and see the sun shining.  While it won’t be like that all day, it was a good way to start the day.

Looking at the web cams, it appears that everyone is seeing some sunshine peaking through the clouds.  The line of storms that moved through late yesterday and last night has moved off to the east now.  Temperatures today will be much cooler than in recent days, with highs only rising to around 50 degrees.  A separate upper level disturbance will cross the region this afternoon, creating the chance for some more showers in the afternoon and evening.  Cloud cover will be variable as we’ll see intervals of sunshine throughout the day.

Get ready to turn on the heat once again, as temperatures tonight will dip down to near freezing.  Higher elevations will likely see temperatures below freezing.  Everyone can expect to see frost on the ground tomorrow morning.

High pressure controls the weather for tomorrow.  Temperatures will remain fairly cool though as winds from the northwest will persist.  Highs tomorrow will be about 10 degrees warmer than today but blue skies will prevail.  Overnight temperatures will be somewhat cold again, but frost is not expected right now.

Another cold front moves through on Friday.  This one is much weaker than the last few we have seen and does not have a lot of moisture associated with it.  A chance of showers and thunderstorms exists for Friday afternoon and early evening, but nothing of significance is expected.

A southerly wind flow returns for the weekend, meaning we’ll see a moderate warmup in temperatures.  An upper level disturbance will move through Saturday, bringing a chance of showers with it for the late afternoon. 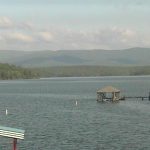 A Sunny Morning on Lake James