The First Day of June Brings the Heat

A lot of locations set more records yesterday.  The official high temperature in Boone yesterday was 87 degrees.  It got up to 99 degrees down in Lenoir!  I’m missing those 70 degree days already.  Heck, I miss snow already.

Today will be hot once again.  Temperatures will be in the mid to upper 80’s in the valleys while the higher elevations will see the upper 70’s.  We remain under the influence of high pressure but a cool front is going to pass through tonight, bringing a little relief to the opressive weather.  Isolated showers and thunderstorms are possible in the late afternoon hours and overnight, but most places can expect to stay dry.

The weather for Thursday through Sunday is pretty consistent.  Low to mid 80 degree temperatures and lots of blue skies can be expected.  It will make for a nice first weekend of June, albeit a warm one.

I don’t like to think too much into the long term weather models, but as of right now they are showing above average temperatures sticking around for at least the next couple of weeks.  Average high temperatures for this time of year range from the low to mid 70’s, but it looks like we can expect temperatures to generally be 5-10 degrees warmer than this. 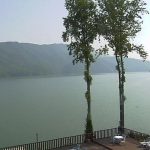 A Perfect Day to Head to the Lake