As far as the ski resort’s snowmaking crews are concerned today’s forecast can be broken down into two pieces – Before Turkey Day and after Turkey Day. Prior to Thanksgiving Day things will be a bit too mild for the snowguns to crank up. Highs in the 50s and 60s will dominate the period from today though Wednesday. Overnight temperatures through that same period are forecasted to be in the mid to upper 30s to mid 40s. Not even the best in snowmaking technology can make snow in those kind of temps.

That takes care of the pre-Thanksgiving Day forecast.

Beginning on November 25th, Thanksgiving Day things turn sharply colder. At least that is the forecast right now. Some light showers of underdeveloped snow (rain) is forecasted Tuesday, Wednesday and into Thursday for much of the region. We can use some rain around the region, though SNOW would be just what the doctor ordered right now if the doctor was a snow-loving, skier or snowboarder. At some point on Thursday (hopefully early) things will begin to nosedive into the mid 20s throughout our entire ski mountains of the Southeast and Mid Atlantic.

As that crazy cold air hits the milder air already in place across the region – there is EVEN a chance for THUNDERSTORMS in some portions of the mountain communities. We’ve had thunderSNOW around here before and we could see that happen later on Thursday. If the timing of the colder air works out, don’t be surprised if Thursday becomes a snow day, rather than the rain-to-snow event that it is looking like right now.

The SECOND HALF of the forecasting period looks perfect for some Thanksgiving Weekend skiing and snowboarding if the ski areas are able to blast enough snow late Thursday and Friday. Cataloochee’s Tammy Brown posted, “Colder temperatures are in the forecast for later this coming week and we want you to remember that with our snowmaking technology, as soon as the colder temperatures arrive we can make snow to add to our current base depth and add additional terrain for your holiday skiing and riding literally overnight. We will keep you posted as these temperatures move into the area and we are able to begin making snow.”

They PLAN to be open Friday morning and from then on as “pre-season” becomes ski season. Temps look borderline right now for Maggie Valley on Thursday evening but we’re guessing that Cat will be able to make enough snow to “pretty things up” overnight and be open Friday AM. If not, they will DEFINATELY be open Saturday AM.

Snowshoe is the only mountain with LOTS of base right now and they are simply awaiting their announced opening date of Wednesday, November 24th. They’ll drop the ropes and begin their ski and snowboarding season with a decent, early season base and more than a few trails open. We’ll get you some idea of trail openings when we speak with Laura Parquetter early this week.

Sugar is the only other resort with any snow on their slopes and most of that is from their mid station and higher. There is almost NO snow down near the base lodge so they will be starting over at creating a base down there. With the really cold temps not forecasted to hit until Friday, we’re thinking that Sugar won’t be able to “go” until Saturday but don’t underestimate the ability of Gunther and his crew to make snow in marginal conditions. They opened to the 3/4th station three weeks ago after only a day and a half of marginal snowmaking ops. If the current forecast holds up, we’re thinking that a day and a half of snowmaking will make for a Saturday reopening for Sugar.

I’m meeting Appalachian Ski Mountain’s GM, Brad Moretz for lunch on Monday and I’ll get his take on things but our “pre-Brad conversation” forecast is that they will look to open on Saturday, November 27th after a day and a half of “blizzarding” the slopes. There’s a chance that they might wait another day or so, but App can blast snow on their mountain like no other ski area in the region. Some will no doubt argue that point but let me tell you at most ski areas when they are making snow from every snowmaking piece of equipment possible – you can STILL find ways to dodge the snowguns by skiing under the blast or wide of them etc. Not so at App. When they blast every piece of equipment they have at their disposal, you cannot escape the blizzard. Snow comes from every direction and overhead – much like Mother Nature’s variety and with that kind of snowmaking effort App might be able to get open from at least Lower Big Appal and their bunny slopes. We’ll check with Brad and see what his thoughts are and we’ll share that with you Monday-Tuesday.

The rest of the ski areas will be making snow and opening as soon as possible and the long range forecast right now that we should see cold enough temperatures at least during the overnight hours to make snow all the way through the end of the month. We can hope that continues from then to the end of March – right???

Be sure to visit our weather and ski network websites at: 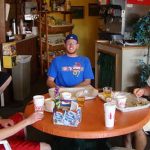 Matt, Tripp, Jeff, Forrest and Cody show us what we do around the mountains when we’re waiting for ski season to begin!