Rain, rain, rain.  That’s the forecast for the next few days as the High Country is going to see a good soaking.  That’s not what skiers and snowboarders want to hear but it is good news as the latter half of 2012 was abnormally dry.  I’m thinking glass half full here!

A cold front is situated over western North Carolina this morning and it’s not going anywhere anytime soon.  It will linger over the region through Wednesday.  During this time period, multiple waves of low pressure will develop and track along the frontal boundary.  As a result, today through early Wednesday will be rather dreary.  When all is said and done, rainfall totals look to be in the 3″ range according to the HPC.  Yuck.

The front will finally begin to move off to the east on Wednesday.  We’ll begin to dry out during the second half of the day and colder temperatures will return overnight.  Snowmaking at the ski areas looks to be possible Wednesday night and it will be much needed.

High pressure tries to build in on Thursday but an area of low pressure will develop to our south.  Temperatures remain cold, but normal for this time of year.  The first half of the day will see some sunshine finally, but clouds will be on the increase during the afternoon.  There is some model disagreement right now on the track of the low but as of right now it appears to be too far to our south to produce anything significant.  A few sprinkles and flurries Thursday evening/night are all that’s expected right now.

High pressure reasserts itself Friday.  Lingering morning clouds will clear by the afternoon and temperatures remain normal for this time of year.  Saturday and Sunday will see continued sunshine with seasonable temperatures. 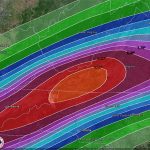