Let’s get the “official” part of this forecast out of the way. We’re not meteorologists but neither are several of the mountain and regional forecasters who are already posting their winter forecasts. We, like many others, await the forecasts of many of the region’s top weather peeps. For our purposes that is the National Weather Searvice, AccuWeather’s Joe Bastardi, WCNC’s Brad Panovich, the Farmer’s Almanac and Joe Murgo of WTAJ TV in Altoona, Pa. — Yes, Joe Murgo. I met Joe a few winters back thanks to Joe Stevens and Snowshoe Mountain. Joe Stevens also puts a lot of stock in what Herb Stevens says. Herb is known as “the skiing weatherman” and writes for SnoCountry. So far there’s nothing from Herb…so we’re compiling what we know, what we’ve been told and some common sense to come up with our own forecast for the season.

I’m not going to name names but there’s a fairly local weather dude who always gives himself “A’s” on forecasting a year after nobody’s really paying attention. So we’re going to have some fun and unlike some of weather pretenders, we’re going to ARCHIVE this forecast so that we can look back when it’s all said and done to see what kind of grade we get. It should be fun.

I want people to trust the information we provide so let me place emphasis on the fact that all of our weather content comes LIVE from stations on or as close to the ski areas as possible. All of our forecasting comes from REAL meteorologists and we’re just doing some fancy compiling of all of these experts. Where there’s disagreement between all the experts – we resort to common sense and REAL science. The science of chance. You know, like there’s a 40% chance of rain. In our case we’re using our handy, dandy weather dartboard to break ties around here and now that you know all of the above…let’s get to it.

INPUT NUMBER ONE: In this corner is the Farmer’s Almanac.

Last year, the Farmers’ Almanac predicted that February would bring widespread snowfall, including many blizzards. That prediction proved all too accurate, with snow blanketing states as far south as Florida and a beast of a storm – dubbed “Snowmageddon” by President Obama – shutting entire cities down throughout the Mid-Atlantic region. In fact, the Farmer’s Almanac was probably THE MOST accurate of all the weather prognosticators we included in our winter forecast.

The Farmer’s Almanac splits our Southeast and MidAtlantic region it separate zones. Regardless, the summary of their forecast is that we should expect “Very Cold with Average Wintry Precipitation”. Further up and northwest of us, they are calling for “Cold and Very Snowy” conditions and in the case of the New England states – “Bitterly Cold with Average Snowfall”.

Sounds pretty good. Chill for a bit while we share some downer input.

INPUT NUMBER TWO: In this corner is Accuweather’s Joe Bastardi

Depending on when you’ve visited Accuweather’s winter forecast you’ll see a mix of what Bastardi calls a “Wintry Battle Zone” over much of the midwest into the northeast. (The West Virginia and Maryland ski areas are barely included in that battle zone.)

He has the rest of the Southeast and Mid Atlantic ski resorts in a “warmer and drier” winter zone. A short time later they tweaked that to forecast the heaviest snow in the region into the Northeast, a battle zone (whatever that means) in the WV and Maryland region and what they predicted as “not much winter” in the Virginia, Tennessee and North Carolina ski resort areas.

The Accuweather forecast forecasts “above normal temps” for ALL of the Southeast and Mid Atlantic region AND “below normal snow and ice”.  (See all maps at the bottom of this story, permission granted from Accuweather.com. Please visit their website for more information www.Accuweather.com )

As late as October 21st they released information stating, “most of the South and Southeast will be warmer and drier than average through February 2011.”

“La Niña is in place and will strengthen and persist through the winter months, giving us a better understanding of what to expect between December and February,” said Mike Halpert, deputy director of the Climate Prediction Center – a division of the National Weather Service. “This is a good time for people to review the outlook and begin preparing for what winter may have in store.”

“Other climate factors will play a role in the winter weather at times across the country,” added Halpert. “Some of these factors, such as the North Atlantic Oscillation, are difficult to predict more than one to two weeks in advance. The NAO adds uncertainty to the forecast in the Northeast and Mid-Atlantic portions of the country.”

Their forecast for the Southeast: warmer and drier than average. This will likely exacerbate drought conditions in these areas. All southern states are at risk of having above normal wildfire conditions starting this winter and lasting into the spring;

Northeast and Mid-Atlantic: equal chances for above-, near-, or below-normal temperatures and precipitation. Winter weather for these regions is often driven not by La Niña but by weather patterns over the northern Atlantic Ocean and Arctic. These are often more short-term, and are generally predictable only a week or so in advance. If enough cold air and moisture are in place, areas north of the Ohio Valley and into the Northeast could see above-average snow.

So far we haven’t heard from Brad Panovich and we’ll let him provide his forecast when he’s ready.

With the NWS calling for equal chances of precip being NORMAL for our coverage area. There is a fair amount of disagreement about how prolonged the currently strong La Niña will actually hold.

Now we’re going to figure in the local natural barometers such as the unbelievably dense acorn crop and the fact that all of the woolly worms in the region are dark, dark, dark – with many bands of black on both ends. We also blindfolded a woolly worm (which is very hard to do) and placed him on our handy, dandy weather dartboard and when he finally came to a stop – he did so right on the “about average precip” section. (Of course, the poor worm MIGHT have suffered a massive heart attack when our dart narrowly missed piercing him as we tossed it to the board.)

Total snowfall for the West Virginia and Maryland ski areas about 5% more than normal. That would put Snowshoe and the rest of the WV ski areas at around 188″ of snow on the season. Maryland’s Wisp Resort will see about 130″ of snowfall.

We think that the Virginia ski resorts will see about 95% of normal snowfall. Resorts like Wintergreen will see perhaps 40″ of natural snow.

The North Carolina ski resorts will get near normal snowfall totals with much of it coming in freak snowstorms. Beech Mountain sees about 80″ of snow per season and we think they get right at that total this season. Bear in mind that they saw 122″ last season.

Temperatures will average slightly milder than normal for the season when it’s all said and done. However with the expected temps only 1° warmer than normal, that shouldn’t make a lot of difference for the snowmaking crews of the region.

So we’re going on record to say that the 2010-2011 Ski and Snowboarding season will be a good one for the Southeast and Mid Atlantic. Great conditions might depend a bit more on snowmaking this season. Last year most of the ski areas didn’t have to make snow past mid February. Things may not be as snowy as last season, but average for our area is what it’s all about. We’ll take 50-80 inches in the North Carolina ski areas, around 120″ or so at Wisp and 185″ or so into the WV ski areas.

A lot of people have already begun asking about WHEN the ski season would get going this year. The almanac is forecasting an early December 1st disturbance that would drop some snow, but we’re not as confident. Looking at the historical averages, we’re thinking that we might see some snowmaking in November, but ski and snowboarding season might not get going in earnest until around the 10th or so of December this winter. We might get a few trails open here and there earlier than that, but the early call is that we’ll see ski areas doing their normal opening precession of opening portions of their mountains as winter officially begins in mid to late December.

That the name “Caleb Weatherbee” who is the official forecaster for the Farmers’ Almanac is actually a pseudonym that has been passed down through generations of Almanac prognosticators and has been used to conceal the true identity of the men and women behind their predictions.

Email us at [email protected] 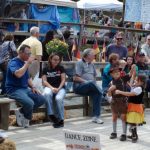