Last night was pretty intense at times as a strong cold front pushed through the region.  It was hard for me to fall asleep as all I could hear was the sound of the wind and rain pelting the side of my place.  Loking at CoCoRaHS this morning, most  locations in the area received anywhere from an inch to an inch and a quarter of rain.  Our Hawksnest weather station is reporting a maximum wind gust of 40 mph since midnight.

After the mess that was last night, we woke up to snow falling from the sky this morning.  Most areas aren’t seeing any accumulation, but some higher elevations are seeing a dusting on the ground.  Snow showers will taper off as the day goes on, but colder temperatures are in place for today.  Highs will be a good 30 degrees colder today than they were yesterday.  Winds of 25-30 mph will create some breezy conditions.  Gusts of up to 45 mph are possible.  Temperatures tonight will dip below freezing and get into the upper 20’s.  The NWS has issued a freeze warning for the area, so expect some frost tomorrow morning.

Tomorrow we will begin a transition back to warmer weather.  High pressure will be in control of our weather for Wednesday and Thursday, gradually working it’s way across the Southeast.  We’ll see mostly sunny skies and moderating temps, with highs on Thursday in the upper 60’s.

Our next system of interest will arrive later in the day on Friday, bringing with it the possiblity of rain and more thunderstorms for the weekend.  Unlike the current system though, colder temperatures will not accompany it. 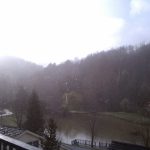 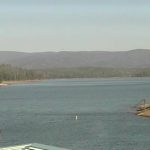 A Beautiful Start to the Week at Lake James
Menu