As I scribe my first Snow News Is Good News of the season, the sun is peaking into our kitchen windows in Scott Depot, West Virginia and the temperature stands at 41 degrees, but in the mountains the temperature is under 30 degrees and the snow guns are operating.  This is bit different from last year because at that time, every ski resort operator, not only in the southeast, but the entire eastern United States was waiting for the mercury to get below that magic mark.

So far this season a handful of resorts have already started providing outdoor fun on the slopes in North Carolina and West Virginia.  A great sign for better things to come as we make that long journey through to the beginning of April.

Like I have done since starting this column a dozen years ago, I again checked out what some of my friendly and well dialed in weather experts thought was going to take place this season for skiers and snowboarders in the Southeast and mid-Atlantic regions.  I have seen a lot of pictures and video from resorts in the region of snowmaking and things are turning whiter every day. So, I wanted to check out my snow crystal ball to see how some weatherman felt about the upcoming season. Here goes. The last time we checked in with Sean Sublette had just moved from being the Chief Meteorologist for WSET-TV in Lynchburg/Roanoke, VA, to being a staff meteorologist at Climate Matters.  Here is what Sean is forecasting for this year:

Seasonal forecasting remains a daunting challenge. Last year’s El Nino proves it, as there was hope it would bring much needed rain to California last winter. But even today, Southern California remains in the midst of a terrible drought.

This winter, there is a weak La Nina in place, which typically brings drier and colder than normal conditions to the Middle Atlantic. However, that does not necessarily mean less snow for the ski resorts, especially in West Virginia.

Colder than normal means more intrusions of Arctic air into the Middle Atlantic. These Arctic outbreaks come on the heels of gusty northwest winds. As those winds rush up the western slopes of the Appalachians, they tend to release fresh snows to the resorts on the windward side of the mountains.

While this effect does bring some snow to the North Carolina resorts, it tends to be most beneficial for the West Virginia resorts. Those northwest winds can drag moisture off of the Great Lakes depositing it in the form of snow. But even away from the Mountaineer State, there should be enough cold outbreaks to allow for some manmade snow to be made during the colder winter nights of January and February. But as a caution, the La Nina signal is weak, so it is important for ski fans to keep an eye on the day-to-day forecast. I reached out this year to a weatherman, who is also a ski instructor, Joe Murgo, Chief Meteorologist at WTAJ-TV in Altoona, PA.  Here are his thoughts:

Last year El Nino dominated our winter weather and made for a slow start and a fast finish to the ski season. At least a saving grace was a large storm that brought much needed snowfall to the region in January. This year, we have a weak La Nina which technically is the opposite of El Nino, but it’s effects are not quite the opposite. Typically, we can expect milder and drier weather for the south into parts of the Mid-Atlantic region. Cold air does tend to get locked to the north much of the time, but do expect occasional fronts to bring spells of colder weather. This is key to saving the ski season for the Southeast ski resorts.

This La Nina will combine with the following:  a plume of cooler water stretching across the Mid-Latitudes of the North Pacific, slow growth in the snowpack across Canada, warm Great Lakes and water temperatures near to slightly above average off of the East Coast. All of these factors lead me to think that temperatures will be near to above average for the resorts from Maryland to the Carolinas. I think precipitation will be less than average including less snowfall than average with exceptions for the resorts from Wisp through Canaan and Snowshoe. I think these resorts will benefit with enough bouts of heavier lake-enhanced snow showers from the warmer Great Lakes and have near to just above average snowfall. I know this wasn’t the best news for skiers, but I do have a silver lining. I think that winter starts early this year with temperatures below average in December which will help to build the base for an earlier start to the ski season compared to last year. Now we switch the channel to Spencer Adkins, Chief Meteorologist for WOWK-TV in the Charleston/Huntington, West Virginia markets.  I always appreciate Spencer’s forecasts as he is one to being on the conservative side, telling us what we need to hear, not what we want to hear:

Ski season has a head start in West Virginia with a whiteout over the weekend of November 19-20 already in the books in Canaan Valley and as of this writing, places like Syracuse, New York are shoveling out from lots of lake effect snow. I feel the winter weather pattern has already shown its hand at the table but here are some ingredients first before making a call:

Weak La Niña signal in the Pacific, lots of snowpack in Siberia, changes in the trough-ridge Pacific North American jet stream pattern, negative shifts in the Arctic and North Atlantic Oscillations and a few more elements are all showing up.

Problems do exist in making a clear-cut call though because La Niña is weak. The various computer models can only be useful up to 7-10 days and we haven’t had any real snowpack in the U.S. to jump up and down about. There are also issues in finding a real good fit in the case studies as to what kind of winter we’ll see.

My own take relies on the current pattern which I think is a sign of what’s to come. Cold fronts have sped up to arrive in the region as fast as every other day. Jet stream winds are picking up. The Polar jet stream is finally making more twists and turns above us instead of a constant ridge of high-pressure and heat that migrates slowly west and east. More swings in the jet steam means more storms steering through the region.

A traditional La Niña pattern would bring more moisture to the Great Lakes and Ohio but generally there’s a drier wedge found across West Virginia and surrounding states along the mountains. The temperatures tend to run about normal but I would lean on warmer conditions in the mountains of western North Carolina and eastern Tennessee. Usually the Southeast sees warm and dry conditions in a La Niña year. We already have serious drought going on in the Southeast and I believe this region will remain relatively warm and dry.

However, from Southwestern Virginia diagonally to the north east along the Appalachian Mountains, I am expecting the parade of cold fronts to slowly build snow base on the high peaks. Also, these infusions of cold air will allow the snow makers to really get after it during the nighttime hours.

Look for the Alberta clipper systems to stack up a few inches here and there with a fairly high frequency. That can add up along with the nighttime snowmaking!

Also, statistically speaking we always see one or two big storms that come up the spine of the mountains from the Southwest or along the Piedmont. These tend to throw in some pretty good amounts as well.

So, my call of average snow conditions may sound less than thrilling on paper but I really believe conditions will be great for skiing particularly from Christmas through early March from SW VA to the northeast.

This winter ski season keep your eye out for the cold fronts from the west, the one or two individual major storms, and some great night time snowmaking to really work out to the benefit of all skiing enthusiasts. Also with a good northwest wind happening frequently, I feel that areas in Pennsylvania to the north and east could really pick up above normal snow based on warm, open Great Lakes waters.

So, in summary I think we will see normal temps but above normal snow in West Virginia, Maryland, Virginia, with normal snow and temps in North Carolina and Tennessee. Finally, we turn to Herb Stevens, a long-time meteorologist and recognized for over 25 years along the east coast as The Skiing Weatherman; his thoughts on this season’s weather is as follows:

It won’t take much to outperform last winter’s pitiful performance by Mother Nature, and I think that the winter of 2016 -2017 will go a long way toward erasing nasty memories of meager snowfalls and scratchy surfaces from a year ago.

We are in a weak La Nina, which correlates to a modestly cold winter in the Appalachians.  Not excessively cold overall, but a little colder than normal, which will give snowmakers ample opportunity to have success building base depths and expanding trail counts, another aspect of last season that was a major struggle.  A warm pool of water is present in the northeastern Pacific, which signals that a western North American ridge at the jet stream level will be present a good amount of the time.  The complimentary feature to that ridge would be an eastern North American trough, which is exactly what we want to help draw cold air out of Canada, and spawn surface storms along the east coast that can deliver good-size shots of natural snow.  Supporting the idea of that trough is the fact that solar output is weak right now, in terms of sun spots and electromagnetic output that correlates with a blocking pattern over the North Atlantic, which leads to a more persistent eastern trough.  Countering all of these positive signs is the knowledge that another feature of La Ninas is a southeastern U.S. ridge, which will exert its’ influence from time to time, leading to periods of milder weather.  However, the La Nina will be weakening further through the winter, so the impact of the ridge will be limited from time to time, though, it will produce a spell of “blah,” mild weather.

Unlike the past several seasons, this winter is going to get off to a fast start.  Analogs, models, and indices such as the Arctic Oscillation strongly suggest that the cold air that arrived the weekend before Thanksgiving will be reinforced going forward into December.  In addition, early northern hemispheric snow cover is at a very high level compared to normal, so the “refrigerator is going to be well stocked” in terms of available cold as the season ramps up.  As the western ridge grows in amplitude over the next several weeks, the source region for air directed into the central Appalachians will become more arctic in nature, helping produce a colder than normal December.  Thanks to the amazing snowmaking capabilities of the mountain crews at all of the southeast ski resorts, it shouldn’t take too long for conditions to be well worth the drive to the mountains.  And because Mother Nature won’t be sitting on the sidelines like she did last year, this has the makings of a very solid season in the southeast region.

Major Arctic Blast of Cold Weather Headed to the Mountains! 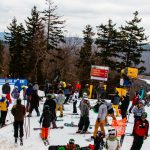