Cloudy conditions exist this morning across the region due to an upper level disturbance just to our north.  This will quickly move off to the east today and we’ll see sunshine by the afternoon.  Temperatures will remain cool though.

Tomorrow sees our best weather of the week as weak high pressure briefly settles in.  An abundance of sunshine and much milder temperatures will make for a very pleasant day, especially when comparing it to Monday and Tuesday.  Clouds increase late in the day though ahead of our next system which will bring showers to the region Saturday night and Sunday.

Monday sees continued cooler than normal weather and cloud cover remains for the most part.  On Tuesday, another low will move up the coast of the mid-Atlantic while a trough of cold air dips down from the north and encompasses the eastern portion of the country.  This is a similar scenario to this past week except that neither the low nor the cold air will be anywhere near as strong as this past week.  Snow is probably a good bet for the higher elevations but others will see precipitation of the unfrozen kind.  Accumulations are not expected as of right now. 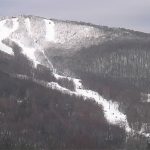