Wow, what a difference 24 hours can make.  We’re seeing quite the change in temperatures this morning compared to the past few days.  If this weekend gave you spring fever, you’re going to be sorely disappointed with the forecast for the week.

The backdoor front that I talked about on Friday moved through right on cue late yesterday.  High pressure is now wedged down the eastern side of the Appalachians.  Temps are going to be much, much cooler today and scattered showers will persist  Basically, it’s going to be a pretty crummy day.

A strong cold front sweeps through overnight and it will push the wedge and the stationary front out of the region.  Showers continue overnight before tapering off in the morning.  A chilly day with gusty winds is in store for tomorrow.  Sunshine should return in the afternoon but temps are going to be more remiscent of February.  Unfortunately, it gets even colder after tomorrow!

Wednesday and Thursday will be very cold by March standards.  Most locations will struggle to hit 40 degrees each day.  On top of that, a quick moving clipper system moves through Wednesday night, bringing about the possibility of snow showers beginning in the evening.  No accumulations are expected.

Two separate waves of low pressure pass to our south later this week.  One does so on Friday and the other on Sunday.  Each wave looks to bring about the possibility of snow showers to the region.  It’s still several days out so confidence isn’t terribly high.  However, continued cold is guaranteed over the weekend and looks to be a good bet for all of next week as well. 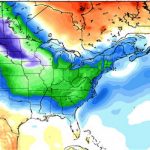