Morning cloudiness, fog, frozen precip, and overall dreary conditions will begin to diminish this afternoon as high pressure begins to move back into the region.  Look for sunshine by the afternoon but be careful on the roads this morning, especially at the higher elevations where the temperature remains below freezing.

Tomorrow will be a pleasant first Friday of 2013.  Temperatures will be near normal for this time of year and it will be a bluebird day on the slopes.  Breezy winds will persist though but overall it will be very nice.

Saturday will start out nice with sunshine and temperatures a good 5-10 degrees warmer than Friday.  However, clouds will be on the increase during the afternoon ahead of a cold front which will move through the region Saturday night.  Another round of a mix of snow/freezing rain is expected Saturday night before tapering off early Sunday.  Temperatures will be cooler on the backside of the front, but it really won’t be that cold and it will be short lived.

High pressure moves back in on Monday and it looks like the typical January is in our future.  At least the first half of next week looks to be mild. 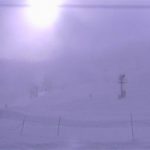 The Sunshine is Trying to Peak Through at Winterplace This Morning