While it is a little chilly this morning, it was nice to see sunshine.  It’s a good way to start the final work day of the week.  More of the same is in store for the weekend ahead, and for the next week for that matter.

The low pressure system that brought us rain over the past few days is making it’s way into eastern Canada right now.  As it continues to move away, skies will clear for most everybody in the region and the winds should die down by the afternoon hours.  High pressure will move in and remain through the weekend.  Daytime high temperatures will warm each day but will still remain a few degrees below normal.  A freeze will occur tonight and tomorrow night, but it should be the last one we see until the latter portion of next week.

There’s really  not a whole lot to say as it’s going to be sunny with moderating temperatures over the next several days.  Even the first half of next week looks pretty nice with near normal temperatures and more sunshine.  Enjoy your weekend! 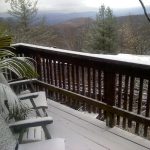 Another Dusting at Beech

Colder Weather on the Way
Menu