It’s finally here!  Frankenstorm has begun and we are already seeing the effects.  Winds are on the increase and showers are making their way into the region.  The next few days will see continued high winds and heavy rain.  Flooding could be an issue for some locations.  Unfortunately, it doesn’t look like a lot of snowfall is in our future.  Some areas might see a couple inches but other than that snow won’t be a huge issue for us.

The second half of the week sees much improving conditions and a drastic moderation in temperatures.  The weekend in particular looks really nice. 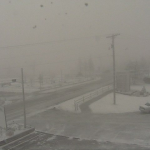