What A Day It Was Yesterday

Wow.  That’s all I can say about yesterday.  If you don’t keep up with the weather on a national level, you missed what was a historic day.  The most severe tornado outbreak that I have personally ever seen occurred across the South yesterday.  There were even tornados up into Virginia and as far north as New York yesterday!  At one point on the radar, it was showing 40 tornado warnings in the country….40!  Alabama, Tennessee, and northern Georgia were especially hit hard and as of this morning, there are more than 190 confirmed casualties across those states.  Early guesses estimate that some of the destruction looks to be in the EF5 range, meaning winds of 200 mph….incredible.  The month of April has turned out to be one of the most active on record for tornadoes, and yesterday took the cake.

While we didn’t see the worst of the storm system, there were tornado reports in Burke and Caldwell Counties around 3 a.m.  Everyone else saw gusty winds and heavy rain.  Looking at CoCoRaHs, it looks like the average rainfall amounts around the area were around an inch or so.

The cold front which brought the storms last night passed through the region early this morning.  Severe storms will be confined to the central and eastern portion of the state today.  Drier air behind the front is already making it’s way into the area.  I was in Charlotte this morning and it was noticeably more humid than when I got out of my car here at the office.  We still have substantial cloud cover but that should begin to subside in the next few hours.  The sun was already peaking through in Blowing Rock this morning.  Temperatures will remain cool today with highs in the low 60’s for most places.

Temperatures tomorrow will remain on the cool side but we will see lots of sunshine.  The weekend looks to be quite pleasant as high pressure will control our weather through Sunday.  Blue skies will prevail and temperatures will be in the upper 60’s to low 70’s.  Our next system of interest arrives on Monday. 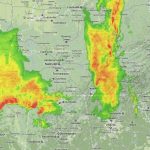